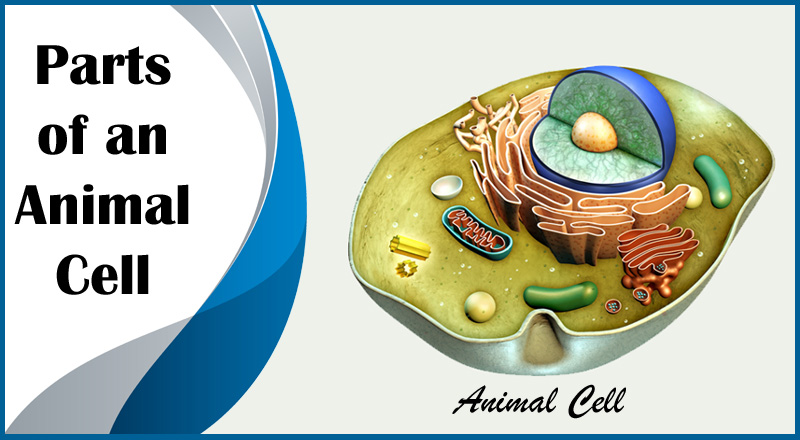 Cells are the basic unit of life in all living organisms. So it is called a functional and structural unit of life where it helps carry out processes such as respiration, feeding, digestion, and excretion. Microscopically, it consists of membranes enclosing cytoplasm and nucleus.

The nucleus of a cell also contains blueprints for proteins that are produced by the cell. Organisms with multicellular cells group together into tissues, which eventually develop into organs. Cells, therefore, work as an array together to accomplish a larger function.

The animal cell represents the smallest unit of functionality associated with living beings in the Animalia kingdom and that belongs to the animal category. Cells responsible for the existence and survival of an animal are something like eukaryotic cells that can combine with other constituents of life to form functional tissues and organs.

As we will see in this article about parts of an animal cell, animal cells have a number of characteristics, functions, and specializations that are involved with forming the organism in which they reside.

What is an Animal Cell?

The Animalia kingdom contains eukaryotic cells (that is, cells with a true nucleus) distributed within various body tissues. The cells of the animal organism are adapted to its biochemical functions, including the respiration process and means of nutrition (heterotrophic nutrition, respiration).

All animals are complex multicellular organisms, which means that their cells are highly specialized, as their functions depend on the cells to which they belong, which are what determine their shape, how they function, and what they need. For example, there are approximately 200 million different types of cells in the human body.

Science still doesn’t know exactly how the animal kingdom descended from protozoan in order to become metazoan, i.e. to go from unicellular life to specialized multicellular life, since no fossil record supports this concept. Here are three theories to consider:

Parts of the Animal Cell

Cells are made up of these parts and structures.

It is possible that the nucleus in an animal cell is the most important element of that cell, particularly since not only does it contain a “manual” that instructs how to synthesize molecules for various functions, but it also provides a strategy on how to work the cell. The cell is part of an organism and is responsible for maintaining that organism.

Therefore, the nucleus informs the cell about the range of tasks that must be accomplished both inside and outside the membrane of the cell. A chromosome is made up of DNA that is held together by a membrane, and this membrane protects the DNA of the chromosome in the form of a helix.

Using this filtering effect, the nucleus helps to ensure the DNA remains untouched, avoids it from being lost, and helps to reduce the number of molecules that come into contact with the cells. Genes contain genetic information that can damage chromosomes.

Animals also have a second cellular structure in addition to the nucleus in which their genetic material resides.

Membranes are the outermost layer of cells, covering almost the entire cell and equally protecting each part of it. The lipid matrix consists primarily of layers of lipids with specialized proteins embedded within them.

Unlike other eukaryotic cells, the membrane of animal cells is not completely waterproof, as there are specific passageways (called pores) capable of allowing substances to enter and leave the body.

Increasing the risk of harmful elements entering inside, while also maintaining homeostasis, the temperature and chemical balance between the cell and the environment, is essential.

Between each nucleus and membrane of the cell lies the cytoplasm. Thus, it possesses the ability to provide a solid physical foundation for all the internal components of a cell. It, among other things, ensures that a cell always contains the substances necessary for its development, regeneration, or communication.

The cytoskeleton is made up of filaments that are more or less rigid and which have the purpose of strengthening the cell and maintaining its parts more or less where they should be.

Additionally, they are the means by which certain molecules can move throughout their internal channels, similar to tubes (in fact, some parts of the cytoskeleton are microtubules).

Mitochondrial DNA is passed along to offspring in the process of reproduction. For metabolic processes, mitochondria are very influential because they produce ATP, which gives animal cells energy.

From raw materials that come from other areas of the animal cell, the Golgi apparatus makes molecules. In this way, it is able to aid in a variety of processes, all of which are related to material repair and new materials creation.

It is also characterized by synthesis of materials, though a smaller scale than the Golgi apparatus. Particularly, it is responsible for the creation of lipids used for maintaining the membrane of the cell.

As cellular components degrade, lysosomes recycle their components to be reused for another purpose. Their ability to dissolve parts of the animal cell can be attributed to the activity of their microscopic bodies.

Typology of the Animal Cell

Cells in animals have their own type. They are classified according to two factors. Organs and tissues are one of the first things that form as the result of cells coming together. Their function is the second. Cells can be divided into several categories, including:

By circulating vitamins and nutrients through the body, they help the body function properly. Additionally, red blood cells transport oxygen throughout the body. A vital role of white blood cells is to protect living beings from infections. The immune system is one of the main features of blood cells.

It is thanks to these cells that organs and skin remain protected since they show an irregular shape.

In general, there are three groups of effects: motor, sensitive, and association. A neuron transmits nerve impulses, making it one of the most important kinds of nerve cells. However, they support neurons, making them grail cells despite their poor public reputation.

What are the 4 main parts of an animal cell?

It is cells that make up animals and plants. Membrane, cytoplasm, and nucleus are described along with their functions in a cell. The cell wall, vacuole, and often chloroplasts are also present in plant cells. Each component is also described in terms of its function.

Who is the biggest cell?

Ostrich egg cells have the largest size. A nerve cell is the longest. Human ovums are the largest cells in the body.

Is egg a cell?

Eggs give rise to every single type of cell in the organism but themselves are highly specialized cells, able to serve only one purpose: the creation of new individuals. Somatic cell nuclei can be reprogrammed by the cytoplasm of an egg so that a new individual can develop.

What is smallest animal cell?

It is Mycoplasma gallicepticum that is the smallest. About 10 micrometers long, it is made up of seven chromosomes. This cell is approximately the size of an ostrich egg. Approximately 15 to 18 centimeters in length and width.

How do animals use their body parts?

It is common to see the different body parts of animals used for walking, running, swimming, climbing trees, and so on. The teeth of carnivorous animals are used to tear flesh from other animals. The fat in a penguin’s body keeps it warm when they’re in cold climates. Woodpeckers use their long beaks to prepare their nests in tree bark.