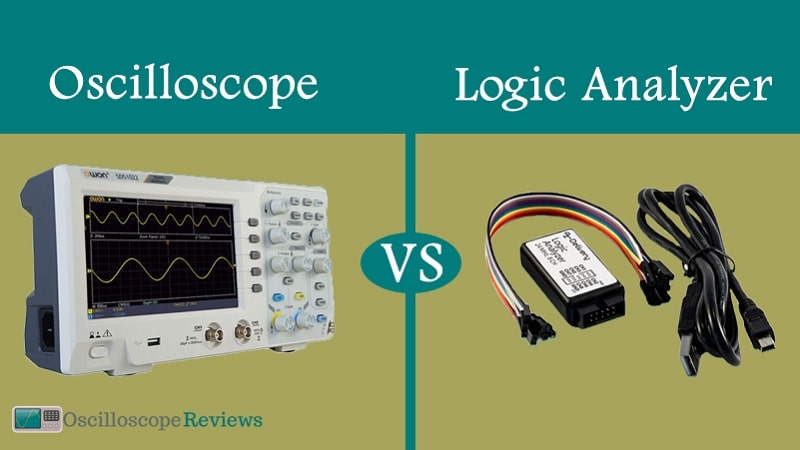 The oscilloscope and logic analyzers happen to be the most recognized types of test gadgets used to test advanced electronic circuits. Through time, they have become the tool of choice for all engineers worldwide. Oscilloscopes are the mainly used tools for evaluating signal integrity and testing analog electronic signals. In contrast, logical analyzers are tools that are not that different from oscilloscopes concerning their functionality.
The main difference is that logical analyzers are ideal for analyzing digital electronic signals. The two devices differ in the manner in which they acquire triggering and input signals. Additionally, the two gadgets showcase waveforms, and they have a vast difference in how they fundamentally operate. Below is an overview of these two devices.

An oscilloscope has previously been given the terms O-scope, digital storage oscilloscope (DSO), cathode-ray oscilloscope (CRO), and scope as additional names. The equipment used to create signals after capturing the responses from electronic devices under test where the graph displayed is a varying signal based on voltage. In most cases, it takes a plot of one or more signals as a function of time or a calibrated two-dimensional.

The analysis of the wavelength oscilloscope has several properties from frequency, amplitude time interval, distortion, and rise in time. An oscilloscope can give the readings of a graph to the user in a functional that traditional oscilloscopes cannot do. The user of an oscilloscope can make adjustments to the display module. Note that a repetitive signal gets displayed as a continuous waveform on the screen of the device.

An oscilloscope has the option of having a storage mechanism that can only capture a single event and provide a continuous display of the event. It allows the user to observe the event waveform for a longer time than the normal functioning where the wave displayed is one of the devices analyzed in real-time.

A logic analyzer is a testing gadget that analyzes and measures several digital electronic signals from multiple sources simultaneously and displays them as logic state listings or time waveforms.
By recording and presenting logical signals in several formats, the computer serves as a data interpreter. By using protocol analyzers, the computer can decode the quality of the digital signal. It is dependent on the contact format used.
Finally, the device allows multiple channels to be measured simultaneously while providing an easy way to view the state of a logic signal. The device also stores the logical inputs in memory so that the monitor can display the entire record.

What are their purposes?

Both oscilloscope and logic analyzers come along with a pool of benefits. Let us look into the details of their various uses.

Every physicist has come across oscilloscopes in numerous operations in the niche. The profession utilizes this tool to check on varying graphical ranges of electrical signals. From massive to tiny signals, the scope can gather messages and store them permanently or temporarily.

Nuclear scientists use highly sensitive oscilloscopes to look into smaller particles in projects.

Alongside physics applications, an Oscilloscope is a standard tool in modern medicine. If you have a doctor friend, I bet you have heard of flat lines in one of your conversations. A flat line is a scope aspect that assists in monitoring a patient’s heartbeat. Moreover, medical doctors also use oscilloscopes to observe brain waves during diagnosis.

Modern vehicles also utilize oscilloscopes in diagnosing a car’s status. You can also check your fuel level using this tool. And ensure effective repair in your vehicle.

With the significant growth in technology, most of you own laptops, televisions, and radio systems. Sometimes these telecommunication devices fail, and you might need to visit your local technician.
The oscilloscope tool is also valuable to the technicians. Technicians require the instrument to deter automotive errors in your laptop. Others use it to test storage devices like CDs and DVDs. You might monitor the performance and the noise.

Oscilloscopes have broader use in engineering. Spanning from design architects, electrical engineers to computer scientists depend on the tool for accurate operations in their duties and responsibilities. Electronic engineers rely on these powerful devices to fetch sufficient data. The computer engineers as well use oscilloscopes to check on the speed and frequency of the computer processor.

Schools provide students with an Oscilloscope to check circuit points with the help of millimeters. You can study waveform on the analog circuit and bytes transmission between digital devices. Also, you might look deeply into your oscilloscope and learn exceptionally about modern and analog circuits.

Art also fits as one of the fields enjoying oscilloscopes’ vast benefits. Expert artists can use an oscilloscope to establish 3D art designs. The results are incredible.

The primary application of a logic analyzer is to study digital signals. These tools were popular multiple years ago when individuals employed several ICs to establish most systems. Oscilloscope made it possible to access the different test points. You could debug entire busses alongside I/O.

However, the invention of more embedded systems on computers became quite challenging to get into these points. Unlike the scopes, logic analyzers have measurements that you can use with popular board systems, including Raspberry Pi and Arduino.
With a logic analyzer, you can easily relate multiple signals on display.

For instance, a related application monitors the data getting into the microprocessor UART. And the information that comes out of an SPI device. Also, a logic analyzer checks the data entering into an I2C device. Logic analyzers can monitor all these buses for a specified period, unlike an oscilloscope.

That’s why logic analyzers, regardless of the quality version, are all vital in multiple scenarios. Most of its primary users are developers and engineers.

The differences between Oscilloscope and Logic Analyzer

On the other hand, a logic analyzer is a research tool for viewing and analyzing optical-electronic signals. You can use it to observe and display different waveforms, much like an oscilloscope, except it can only be used with digital signals.

The functions of a logic analyzer make it ideal for troubleshooting technical and timing issues in a digital world. Their worth is derived from their features. As a result, the scope is an essential feature of an oscilloscope, whereas a logical analyzer focuses on digital channels. The logic analyzer captures and displays a series of digital events by viewing data on several media and supplying the user with a log data display time, a challenge in an oscilloscope.

A comparison chart between a Logical analyzer and an oscilloscope

What to consider when buying an oscilloscope and logic analyzer

Here are the factors to consider when buying an oscilloscope or logic analyzer.

One of the critical elements to pay attention to when buying oscilloscopes and logic analyzers is bandwidth. It is generally the upper limit of a signal frequency that can get through amplifiers. It would be best to go for scopes with maximum bandwidth to get accurate signal frequencies.
Experts advise you to consider scopes with bandwidth strength that triples the signal strength you anticipate. In case you are dealing with digital applications, it would help pick tools with five times the bandwidth strength of your system.

A sample rate of an oscilloscope has a close connection with its real-time bandwidth. It would help pick a tool whose sample rate is at least five times higher than the bandwidth. Entry-level scopes have a higher rate spanning from 1 to 2 GS/s. The average instruments have ranged from 5 to 10 GS/s.

The quicker you take to sample, the less likely you are to lose information. And the signal under test will come out effectively.

It is crucial to focus on how the equipment behaves when responding to events. Some might have user-defined patterns that the machine can detect. A significant example is a USB logic analyzer.
Oscilloscopes have triggering capabilities that enable event isolation and get signals before and after the event. Most of them have software and digital triggering. Powerful oscilloscopes have faster rearm times within triggers. With such tools, you cannot miss triggers.

Before making your purchase choice, you might first decide on your preferred form factor. There is a variety of form factors of oscilloscope and logic analyzer; portable and PC-based.

The instruments with a lightweight nature might be favorable to mobile engineers. However, they have issues related to shorter battery lifespan and ineffective displays due to sunlight. Some are high-end performers but come with huge costs.

Devices with the PC-based form design are more advantageous, unlike the traditional ones. They have affordable costs. Also, most of them have transparent displays and quick processors. Other parts as mouse and keyboards assure you of faster operation. With a single mouse click, you can export data into spreadsheets or word documents within several seconds.

If you are a seasonal user, you might desire a tool with accessible features and designs to remember.

Sometimes we need help during machine malfunctions. Some oscilloscope and logic analyzers have online and offline support through chats or calls. At the same time, others lack these support systems.

You can go through it and clear out the grey areas before using the terms.