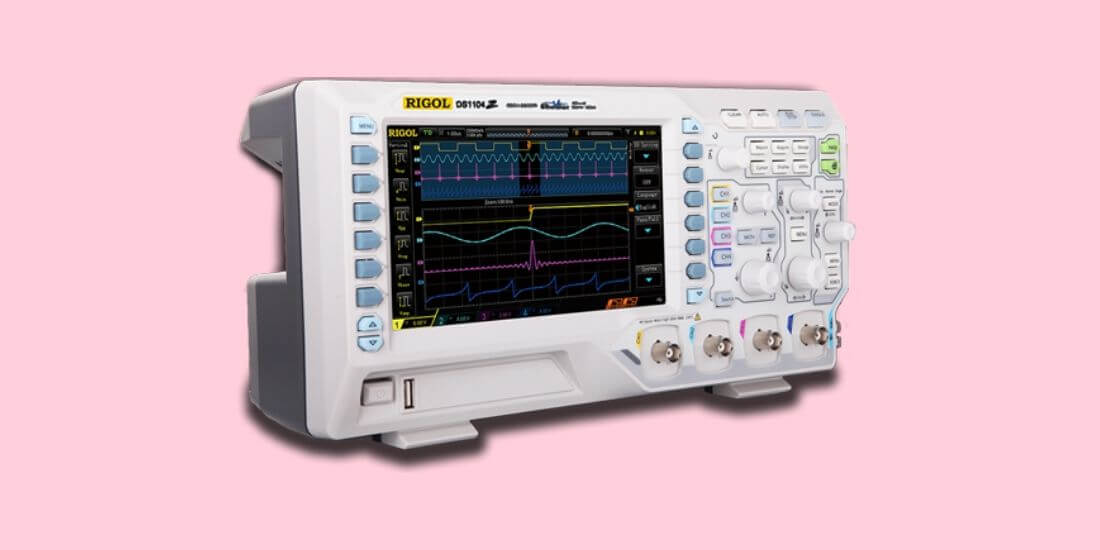 Oscilloscopes like the SDS1102CML model offered by Siglent Technologies quickly became the preferred choice for many.

Of course, one effective method to know how good the unit truly is would be to compare it with other well-established oscilloscopes. That’s why today we’re not only reviewing one but rather two units to see which one is better.

During this article, we’ll cover some of the essential features offered by the two units to pick the winner between Siglent SDS1102CML vs Rigol DS1054Z.

By the end of this read, you’ll have a better idea of why picking one or the other would be a wise decision.

In the following review, we’ll analyze a reliable product from Siglent Technologies. This brand has produced many incredible oscilloscopes in the past, and this one’s not any different.

The design of this machine is highly user-friendly. There aren’t a ton of buttons that could feel overwhelming to novice users, but every push or rotary button included serves its purpose efficiently.

Once pressed, the response time of the buttons is pretty good, securing precise results in a matter of seconds.

The unit weighs 5.5 pounds. Other items included in the purchase are a couple of probes, USB cable, power cord, the manual, and software.

With a 7” LCD screen working on 480×234 pixels, the unit is capable of picturing waveforms and data efficiently.

Also, the internal 8×18 division grid guarantees every bit of information is visible, which should allow you to analyze the operations without problems. The unit offers 2mV vertical sensitivity per division, which captures low-level signals.

Additionally, the number of advanced triggers included makes it possible to isolate particular signals, improving the quality of the results, and the accuracy of the data displayed.

As for the controls, well, they’re easy to figure out even if you have no experience using scopes. Furthermore, the unit comes with RS232 and USB ports to secure proper communication between the devices.

The unit features a two-channel build with 100 MHz of bandwidth available. With such capacity, the oscilloscope performs well in a variety of tasks such as product design, assembly lines, engineering, and more. Additionally, the maximum real-time sample rate is 1GS/s, with 1Mpts of record length.

Although it isn’t the most compact tool, the bandwidth, channels, and power capacity are remarkable, making the scope a piece of must-have equipment.

There are many incredible features responsible for the performance of this unit. Previous customers would point out stuff like its design, the controls, and the many tasks it can do, like some of the reasons why they like it. This device is, after all, a good pick for every electrician out there.

Many people would argue that the colors are not that important when it comes to oscilloscopes, but they do serve a purpose. In this case, the unit features blue and yellow colors that work as a visual aid to figure out the buttons quickly.

And, let’s be real here, everyone likes their tools to look good. Fortunately, this unit from Rigol has plastic construction, featuring a gray color design that makes the oscilloscope look great with a clean finish.

Other than the oscilloscope, the purchase includes a power cord, a pair of probes, and the software CD for PC compatibility.

If you were wondering what would be a good reason to buy this unit, then one of those reasons would be its display.

The UltraVision technology guarantees an efficient display of the data from each operation. This display offers a resolution of 800×480 to keep track of the information.

Some of the tasks this oscilloscope can do are to offer math operators, different measurement functions, and many other essential functions.

The incredible display and reliable functionality make this model one of the most suitable picks for everyone.

Before going all-in with this device, you may want to take a quick look at the buttons to figure them out.

On the first impression, they may be a little overwhelming and confusing. It’s a bit of a learning curve, but it won’t take much time to understand them.

This device is a four-channel oscilloscope that works with a starter bandwidth of 50 MHZ. However, the bandwidth is upgradeable to 100MHz, just like the memory depth upgrades from 12 Mpts to 24 Mpts too.

The real-time sample rate offered by this unit is 1GSa/sec, which makes the unit as useful as some of the high-end oscilloscopes.

By featuring four channels, plenty of functionalities, and the capacity to perform many operations, this machine is a suitable pick for a lot of people. The Rigol DS1054Z is a tool that easily improves the signal and logic data quality.

So, Which Is the Best Oscilloscope?

Although some may prefer the Siglent SDS1102CML unit, most would argue that the better choice is the Rigol DS1054Z oscilloscope instead. There are many reasons to back up that claim.

The most noticeable differences between the two and the reasons why Rigol has the best oscilloscope is because of its specifications.

Not only does the Rigol DS1054Z have more channels, but the display resolution is also larger.

That doesn’t mean the Siglent SDS1102CML doesn’t have its own advantages. For example, the bandwidth offered by this unit is 100 MHz, which is superior to Rigol’s 50 MHz capacity.

However, apart from that, everything else is in Rigol’s favor; more memory depth, more channels, a small size, and many other features are some of the considerations that make people prefer this oscilloscope above the rest.

After our Siglent SDS1102CML vs Rigol DS1054Z reviews, we now see why the latter is a better pick than the first one. If you truly need that extra bandwidth, then the Siglent unit arguably would be a more suitable choice. For everything else, go Rigol.