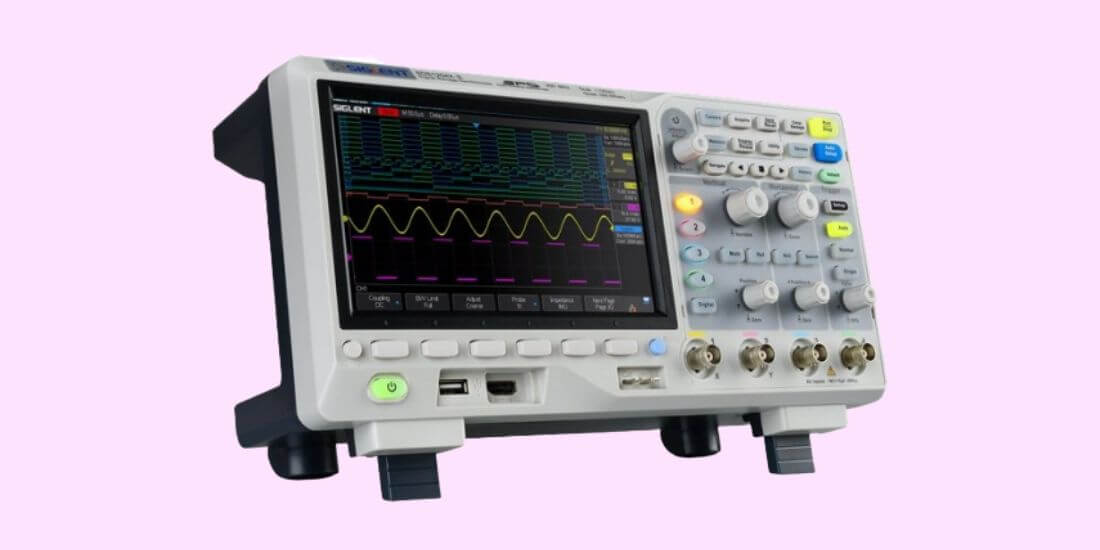 Digital oscilloscopes are useful instruments for many people. Naturally, if you’re looking to buy one, you’d want to get the best one. During your research, you’ll encounter two models that deliver incredible features, and outstanding performance: the Siglent SDS1104X-E and Rigol DS1054Z.

Since there’s no need to buy both, we’ll review the two units to figure out the winner between the Rigol DS1054Z VS Siglent SDS1104X-E.
Let’s begin, then! 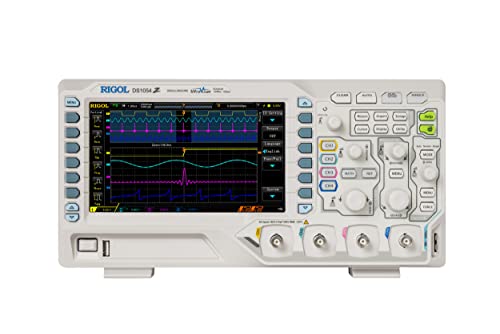 The great performance put up by this oscilloscope is possible due to a combination of great design, controls, and plenty of useful features. Everyone working with electronics, whether they’re beginners or professionals, would get their money’s worth after trying out this instrument.

The Rigol DS1054Z features plastic material for most of its build. This unit isn’t heavy at all, as it only weighs 6.60 pounds, allowing you to maneuver it as much as needed. For the exterior, the oscilloscope features a grey color that makes the instrument aesthetically pleasing.

Besides grey, there are different colors to differentiate many of the buttons included, with some of them being yellow or blue depending on their functionality.

Not only is the unit good-looking, but it uses different colors to help users understand its functionality a little bit better. In the package, you’ll find the oscilloscope, power cord, two probes, and the software CD.

The UltraVision is probably one of the most useful features of this scope. It provides a large display measuring 7 inches, with an outstanding resolution. In there, you’ll be able to track essential data without issues, all thanks to the 800×480 pixels display.

Some of the data you can record through that display are math operators, vertical or horizontal measurement functions, and many more. Considering the price, the number of tasks you can accomplish with this unit is yet another one of its benefits.

Now, understanding the buttons and their functionalities may be tricky at first. Granted, the Rigol DS1054Z isn’t the most user-friendly oscilloscope if you’re a beginner. However, you’ll be right on track by referring to the very helpful guidelines.

Unlike some other units available at a similar price range, the Rigol DS1054Z offers four channels instead of two. The starter bandwidth is 50MHz, but the unit is capable of upgrading to 100 MHz. Another upgradeable feature is memory depth, which can go from 12 to 24Mpts.

As for the sampling rate, this instrument delivers 1GSa/sec. Previous customers would recommend this scope because of the four channels featured.

Although one could argue whether or not they’re even necessary, it’s quite clear that they do help improve signals relationship as well as the logic data. 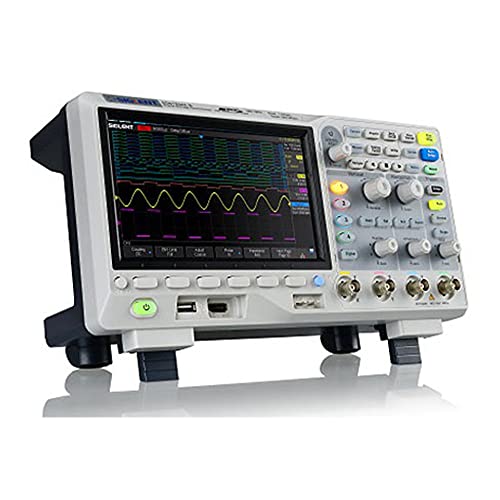 There’s no doubt that the Siglent SDS1104X-E is among the most efficient digital oscilloscopes currently available. The many features included deliver remarkable performance providing useful new characteristics such as the built-in web server. We’ll talk about that later. First, let’s talk about the unit’s design.

This oscilloscope is a compact instrument that barely consumes any space on the benchtop. It features small, foldable legs that allow it to lean slightly backward, sitting in a comfortable, angled position. The unit works as a standard decoder, working with IIC, SPI, UART/Rs232, CAN, and LIN.

Other items included in the package are four probes, which require calibration before first use. If you need any assistance, you can refer to the helpful guide included, which is highly informative.

Under the first impression, the Siglent SDS1104X-E is a simple oscilloscope with plenty of technological features that improve its performance significantly.

This unit features a TFT-LCD display, measuring 7-inch. The resolution is 800×480, which is pretty large when compared to other scopes within the same price range. Not only is the screen large, but it properly shows the functions with different colors for you to read the data easily.

The oscilloscope comes with controls for both the on-screen Bode plot and the web-browser, though they’re only on 4 channels. Additionally, there are WiFi controls, which are also optional on 4 channels only.

Instead of 12 divisions for the signal grid, the unit features 14 in total. The headings for each menu are conveniently out of view, and the performance of the probes included is outstanding.

Although basic, the organization of the control panel is great. Both the rotary and the push buttons react quickly to your commands, and they’re quite intuitive for each one of the functions. The user interface is pleasantly responsive too.

This digital oscilloscope is a standard decoder that works on four channels. The bandwidth is 100MHz, with 1GSa/use and 1Mpts FFT.

So, Which Is the Best Oscilloscope?

Alright, so, the question now is which one to buy? Well, the answer to that isn’t necessarily clear, as it depends a lot on what the user wants to do.

In terms of specifications, many people would argue that the best unit between the two is the Siglent SDS1104X-E. Its performance is just remarkable, way more superior than the Rigol DS1054Z.

The Siglent SDS1104X-E offers better FFT, while also offering double the sampling rate in multi-channel operation. Another useful feature provided by this unit and not by Rigol is the option to integrate MSO capability.

When compared to Rigol, this Siglent unit delivers better remote access too. The built-in webserver is quick to update, allowing you to track signals on the PC through an update rate worth the effort.

The question is, which one do you need? While Siglent Technologies has a better oscilloscope, some users may not need all that power. For basic tasks, Rigol’s unit may be the best choice.

While Siglent Technologies claims victory on the Rigol DS1054Z vs Siglent SDS1104X-E debate, it’s your decision which one to buy in the end. Now, you have a better understanding of what these two units do, which should help you make the final call.