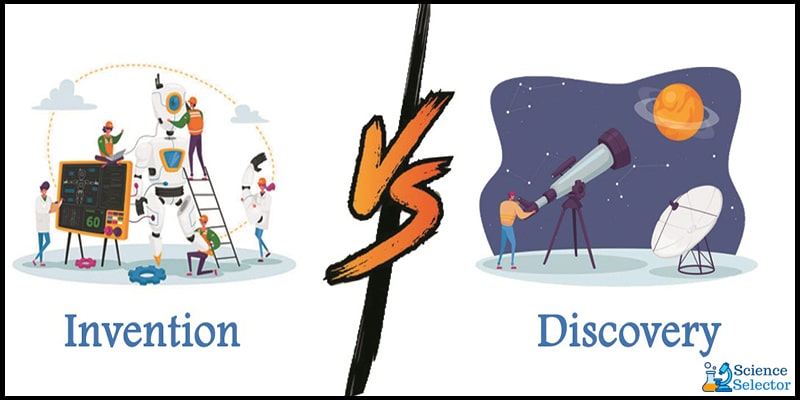 We live a very busy life, and discoveries and inventions play a pivotal role in our everyday life. People tend to have a misperception regarding the meaning of the terms; discovery, and invention. It is widely believed that these two terms are synonyms. It’s time to be clear. Discoveries are merely recognizing existing things for the first time. On the other hand, an invention means creating something new entirely using unique ideas.

“To originate or create as a product of one’s own ingenuity, experimentation, or contrivance: to invent the telegraph.”

According to Collins Dictionary;

“An invention is a machine, device, or system that has been invented by someone.”
Dictionary.com defines ‘discover’ as:

“To see, get knowledge of, learn of, find, or find out; gain sight or knowledge of (something previously unseen or unknown): to discover America; to discover electricity.”

When we are talking about the words ‘invent’ and ‘discover’, they are synonymous and they can often be used in a similar way but they do have some specific differences. The idea of inventing is to create something new. A development that had never occurred before.

Mobile phones, for example, weren’t found under beds or in cupboards before they were invented. This was a brand new technological development. Therefore, it was created through invention. A discovery, on the other hand, is something that has just recently been uncovered that has long existed. In the case of gold, it was discovered and not invented or created by anybody. In order to find it, they had to dig a hole in the ground. Thus, when we say discovery we are finding something, and when we say invention we are making something that we have never had before.

Difference Between Invention and Discovery

Is science a discovery?

Science refers to obtaining knowledge, knowledge as a result of the process. The fact is that you can discover knowledge, but you cannot create it.

Is fire a discovery or invention?

The reaction is natural to Fire which needed no invention. Prehistoric creatures undoubtedly knew about fire. A forest fire caused by lightning would likely fascinate and amaze them.

Is electricity an invention or discovery?

It is undoubtedly a discovery. Electricity has always existed, and it will always exist. There is no inventing electricity, just like there is no inventing Truth, regardless of what anyone else (including me) may think, say, or do. In nature, electrical charge is omnipresent. It is either generated by static electricity, discharged to the earth, or created by friction between electrically charged materials.

Some Inventions of Science in Earth’s History